Thanksgiving is next week and I know you all are looking for the perfect cornbread recipe to impress your lovely guests with! You know you want to be remembered as having the BEST cornbread of all time at the family Thanksgiving! I’m feeling pretty confident that this recipe will give you that recognition you’ve been longing for. LOL This sweet potato cornbread is perfectly spiced with the familiar flavors of pumpkin pie spice, it’s perfectly sweet and fluffy which will leave your guests wondering, “is this cornbread or cake!?”

I mean, just look at it!

It looks so divine you wish it would magically appear in front of you RIGHT NOW! 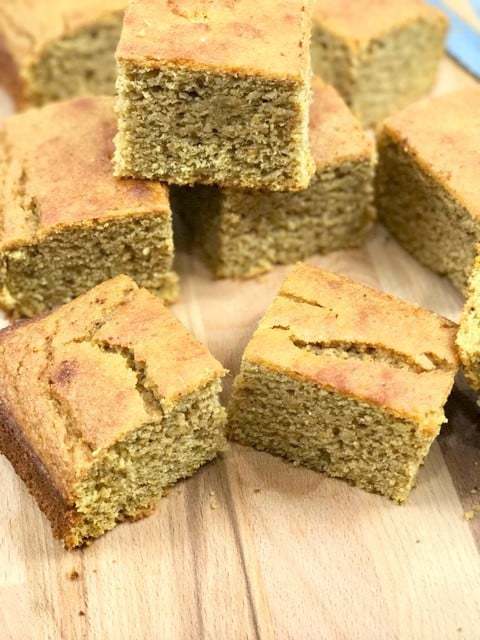 Okay, so I hate to be the bearer of bad news, but the sweet potato cornbread isn’t going to magically appear when you say “BAM!” with your jazz hands. LOL Now, luckily for you, this recipe isn’t extremely complicated at all. The hardest part about this recipe is making sure your sweet potato is tender enough before you start mashing it.

Now, let’s get down to the cornbread recipe! I used a standard cornbread recipe for my base, then, of course, I had to spice things up a little bit! I LOVE warming spices so I used cinnamon, ginger, cardamom, nutmeg and cloves! I realize not everybody has as well stocked of a cupboard like I do so you can take a shortcut, if you must, and use pumpkin pie spice in place of my spices. I’d suggest using about 2 ½ teaspoons of pumpkin pie spice and then add in 1 teaspoon of cinnamon! 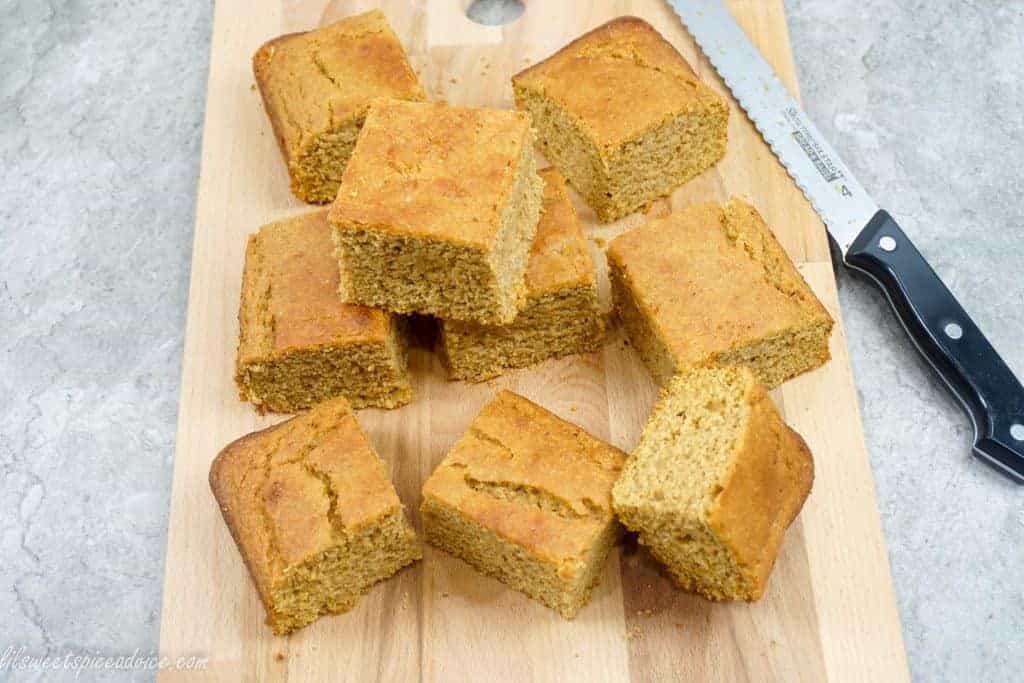 How many of you all like cornbread with a slightly crispy crust? (If I don’t see everyone’s virtual hand raised I’m possibly going to judge you, just a little bit. LOL) The trick that my mother taught me to a slightly crispy crust on your cornbread is to add the oil used in your recipe into the baking pan and then insert the baking pan in the oven while it’s preheating! You want your oil to be getting hot for at least 5 or 6 minutes. Once your cornbread is mixed you remove the pan from the oven and whisk the hot oil into the cornbread mixture. Then you quickly place the cornbread mixture into the baking pan and return that pan to the oven.

Now, about this oil situation, my mother always used vegetable oil. You guys know I don’t use vegetable oil  anymore after completing some research. If I could get my hands on some leaf lard I would use that, but organic coconut oil is extremely convenient for me so that’s what I use. I promise you won’t be able to distinguish the coconut oil flavor once you taste the sweet potato cornbread. 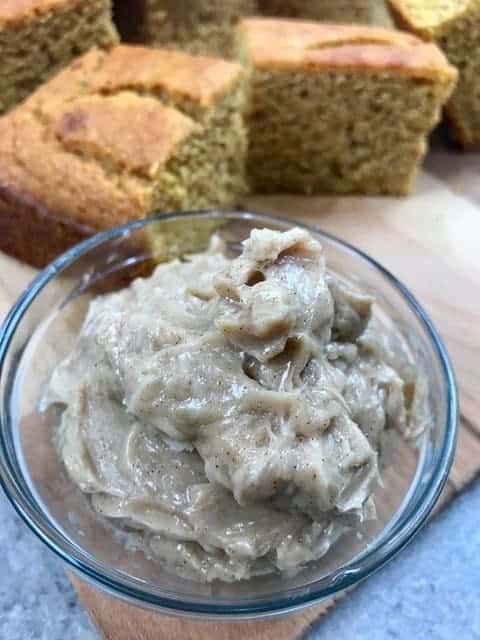 Most people slap a pat of butter on top of their cornbread and call it a day. I’m not most people! LOL, I had to kick things up a notch by making some whipped maple cinnamon butter! It’s super easy to make. All you have to do is mix some maple syrup into your softened butter and add some cinnamon. You’re done! Easy peasy, huh?

Now go forth and prosper with this sweet potato cornbread recipe at your family Thanksgiving. Do me a favor, please, take pictures of your cornbread at the family table and tag me in it on social media (@merci_britte)! I love it when you guys tag me in your interpretations of my dishes. =) As always, if you like this recipe please share it with your family and friends by clicking one of the share buttons on the side, top, or bottom of this post. Let me know in the comment section if you’ve ever thought about trying sweet potato cornbread before! 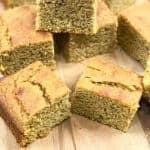 Sweet Potato Cornbread! I don’t think I’d have any willpower whatsoever around a pan of this! The whipped maple cinnamon butter sounds heavenly, and I bet it pairs perfectly with the cornbread. (I’d love to put it on pancakes and waffles, too!)