Hey, you guys!! It’s been ages since I’ve posted anything on my blog, and for that, I apologize. I’ve had a lot going on the past few months and I promise I will share a blog post next week explaining why I’ve been absent. My health has taken a toll on me lately. Anyway, have you guys missed me? I’ve missed y’all like crazy! I’ve wanted to share this Blue Moon Cinnamon Horchata Ale Bread Pudding with White Chocolate Ale Sauce for quite some time now. And I’m totally eating a scoop as I type this post! LOL 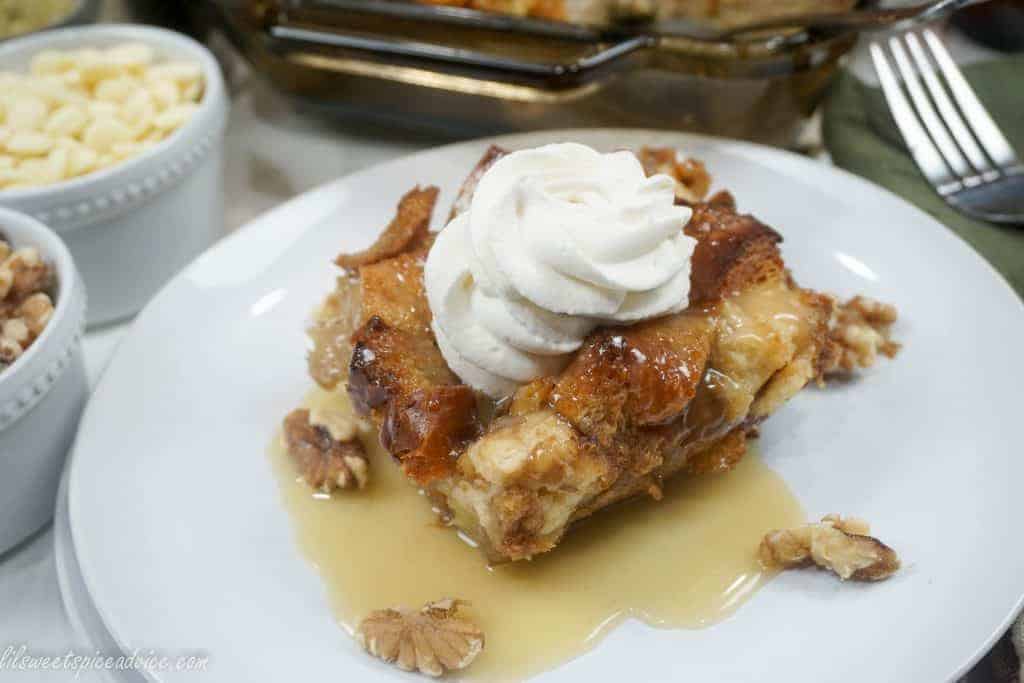 Let’s get into the deets on this bread pudding though! One day I perused the beer aisle in Randall’s and lo and behold, there it appeared…the beer I’ve been waiting for all of my life! Okay, that may sound a little dramatic, but let me explain. LOL, I am not an avid beer drinker, I am more of a liquor and wine girl. I’ve been struggling for years trying to find beers that I wouldn’t mind drinking in a social setting. When I was in Belgium several years back, I discovered lambic, or fruit, beers and fell in love! Unfortunately, there aren’t a plethora of lambic beers available in Houston. 🙁  Sooo I have been on a mission to find a few tolerable normal brews. When I read “Cinnamon Horchata Ale” on the label I knew I had to go ahead and test it out. 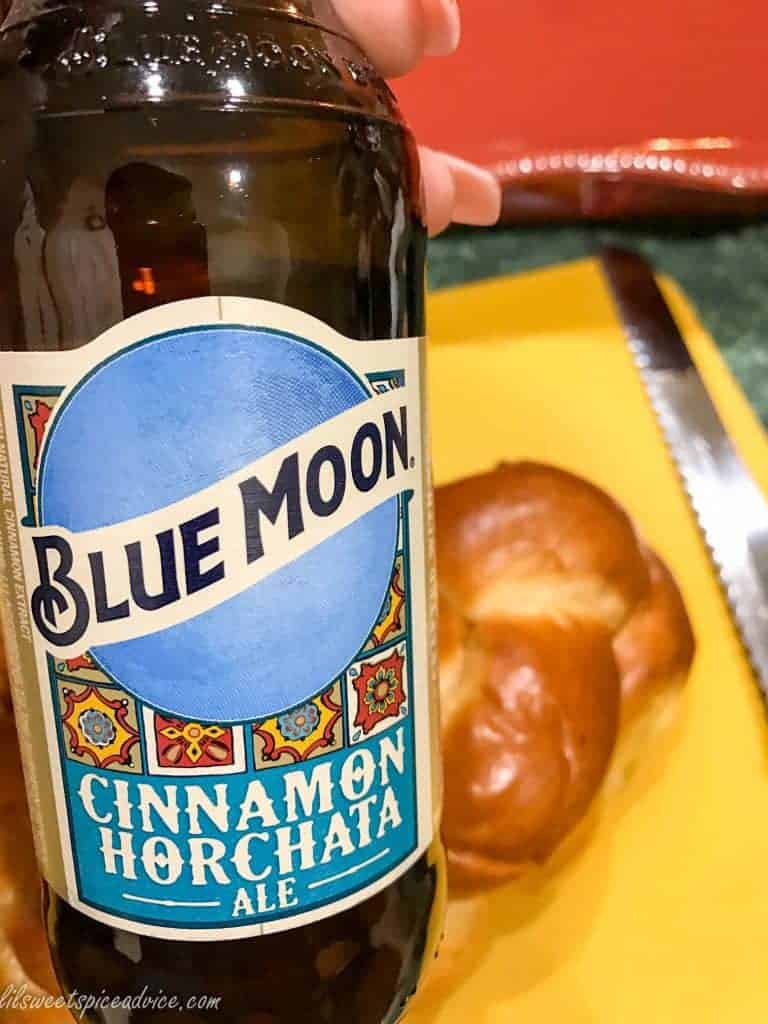 When I tell y’all that Blue Moon Cinnamon Horchata Ale did NOT disappoint! The cinnamon flavor is so pronounced with slight notes of vanilla; it’s slightly sweet and yeasty. It also has a creamy feel and light bodied! My brain immediately went into recipe creation mode trying to figure out the best recipe to showcase this lovely beer in all its glory. (And no, this is not a sponsored post. I just love it that much!) I did a little online research for beer bread puddings and came across this recipe and adapted it. I had been craving cheesecake for a few days and decided to try to combine the two into one stellar creation by layering a cheesecake filling between the cubed bread. 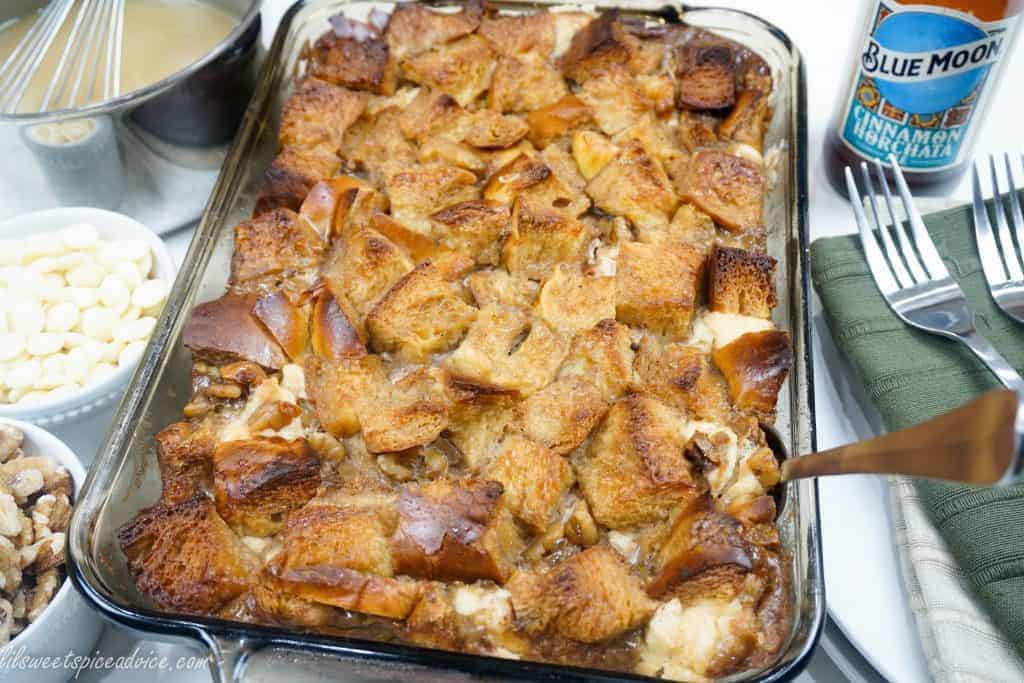 Let’s start with the most crucial component of bread pudding: the bread. I used one of my absolute favorite sweet egg breads, Challah! Challah bread is extremely buttery and fluffy so it soaks up all that yummy beer and custard wonderfully. You can easily substitute Brioche if you can’t find Challah bread.

To assemble this bread pudding all you have to do is cube the bread, layer half of the bread in a greased baking pan and then dollop your cheesecake filling on top of the bread, then cover the cheesecake filling with the chopped walnuts then you finish layering with the remaining bread. If you don’t like nuts you can definitely omit them; I just personally love to have a little bit of crunch in my desserts. The cheesecake filling is just a loaf of softened cream cheese mixed with a little organic evaporated cane juice (raw sugar), vanilla, and a dash of cinnamon! 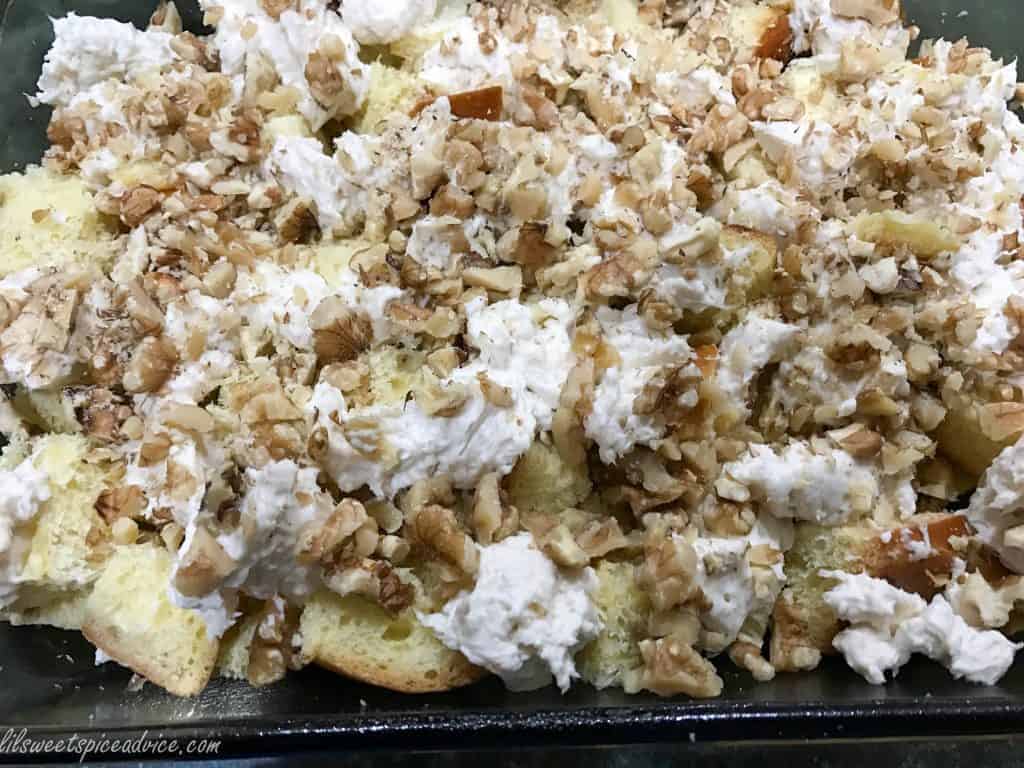 After the layering is complete you now want to crack open a bottle of the beer and slowly pour it over the bread, ensuring that all pieces are saturated with the beer. Now, you want to let that bread soak up all of that beer and rest for at least 30 minutes. In the meantime, you’ll want to start making the custard which is just eggs, heavy whipping cream, organic brown sugar, ground ginger, cloves, cinnamon and freshly grated nutmeg. Once you have that custard fully incorporated you will want to gently ladle it over the bread and then you want to pop that bad boy in the oven and let it bake for at least 1 hour, or until it’s set and an inserted knife comes out clean. And for the last ten minutes of baking, you may want to throw a piece of foil on top to prevent over-browning! 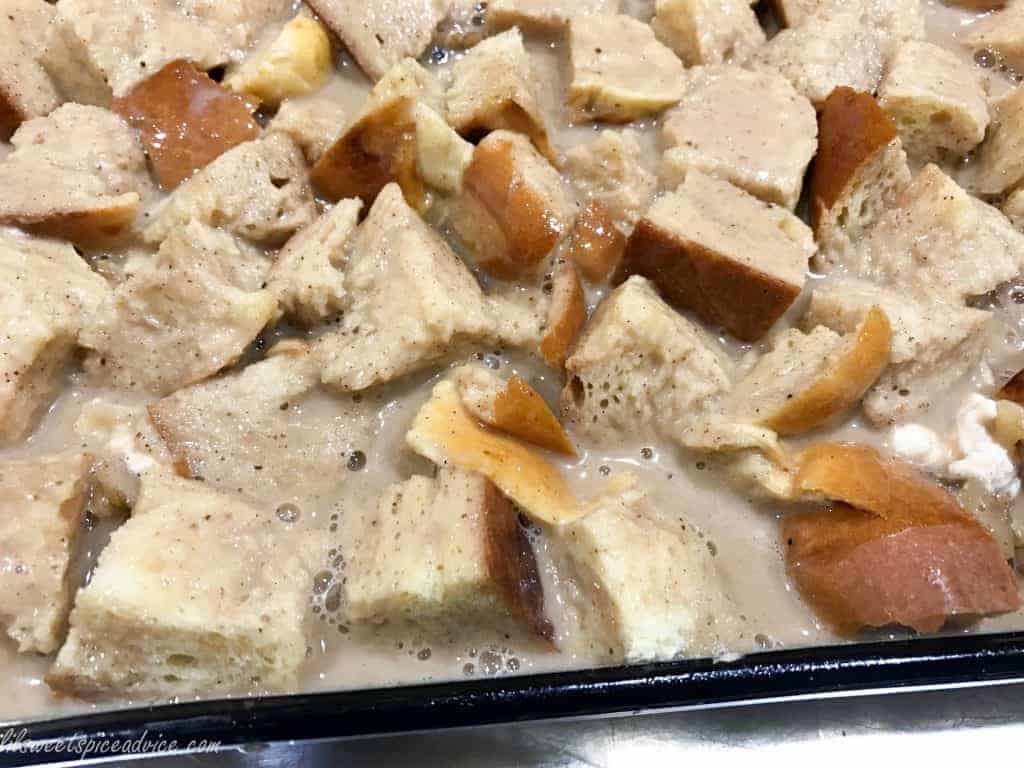 While the bread pudding is baking is when you will want to start on the White Chocolate Ale Sauce. Trust me; it is worth the few extra steps. You’ll want to reduce on low heat a cup of beer, organic evaporated cane juice and a dash of cinnamon by half which will take about 30 minutes. After the beer syrup has reduced you will want to add your heavy whipping cream. After you carefully whisk in your heavy whipping cream return the pan to the burner and simmer the sauce for 5 minutes until it slightly thickens. After it slightly thickens, add your white chocolate chips and whisk until smooth and fully incorporated. Your sauce is complete! 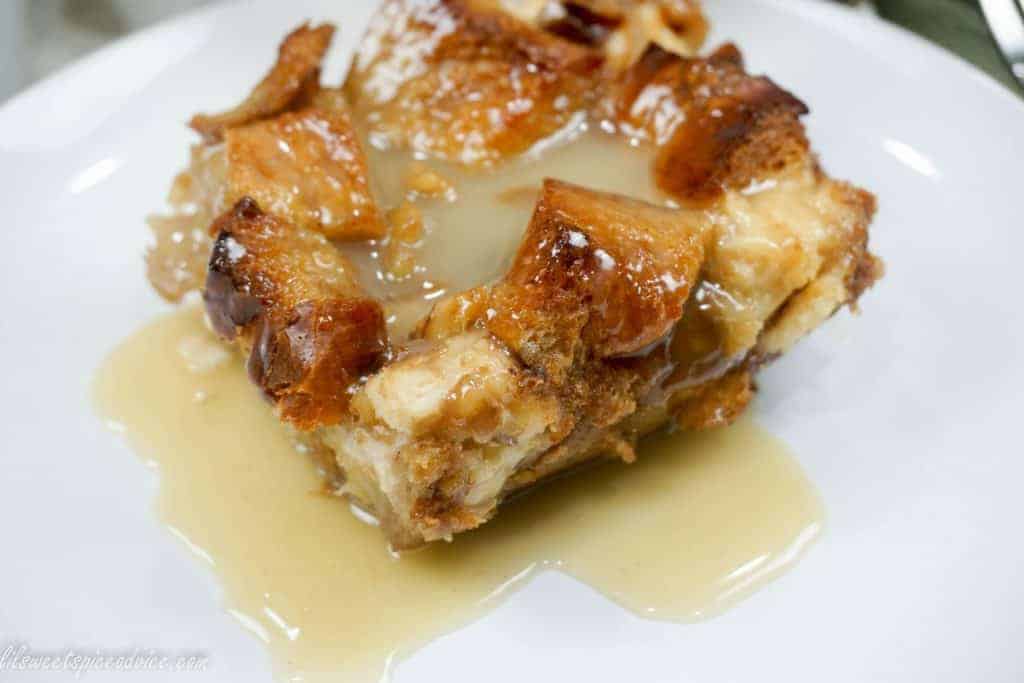 Oh, let’s not forget the fresh whipped cream. Pop a stainless steel bowl and a whisk or hand mixer beaters into a freezer for at least 20 minutes until icy cold. After your bowl and beaters or whisk has been removed from the freezer, add your cold heavy whipping cream, sugar, and vanilla extract to the bowl and beat until medium-stiff peaks form. Now, when I originally created this recipe I made white chocolate whipped cream. If you’re feeling a little boujee go ahead and make some white chocolate whipped cream!

I’m sure you’re thinking this has got to be the sweetest dessert ever, but I promise it’s not! There isn’t much sugar in neither the custard nor the cheesecake filling so most of the sweetness comes from the ale sauce. I think the judges on Chopped would be pleased with the level of sweetness in this bread pudding. LOL 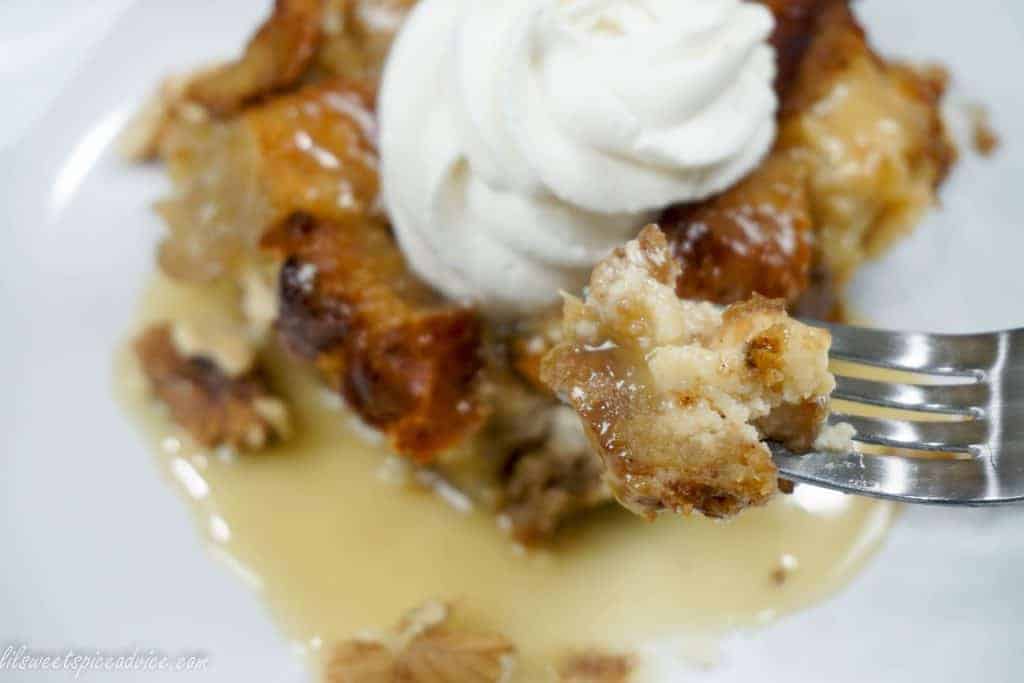 Let me know in the comment section down below WHEN you will be giving this a try because I know I’ve tempted you. =) Pleaseee do me a favor and share this with your favorite people by using the share buttons at the top, bottom, or side of this post. We’re going to get back into the groove of things and will be meeting up here weekly for new posts and recipes. In the meantime, chat with me on social media by following me here: Bloglovin’,Facebook , Instagram , Twitter  and Snapchat (@merci_britte)  to stay up-to-date. Also please subscribe to my YouTube  channel because I will be adding more recipe and chat videos soon! 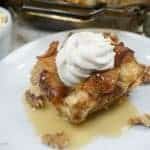 Thank you! It’s one of the best bread puddings ever. Hope you try it and enjoy it!