HAPPY NEW YEAR! I cannot believe we have entered a new decade. Also, I can’t believe it’s winter…according to the calendar. LOL It seems like Houston did not get the memo! 🤦🏾‍♀️ Every Houstonian can join me in saying, “Get it together, sis!” 😂 Anyway, I am almost positive it is cold where you are and you are trying to find recipes that will keep you and your family toasty. Now, fair warning, this Instant Pot Texas Chili is BOLD and packs a punch that is going to leave your taste buds tingling. This Instant Pot Texas Chili is full of chunky cuts of chuck roast as well as coarsely ground chuck roast that are stewed in a homemade chili paste, beef bone broth, spices like cumin, Mexican oregano, smoked and hot paprika, diced tomatoes with green chilies, tomato sauce, and my secret weapon, whiskey. 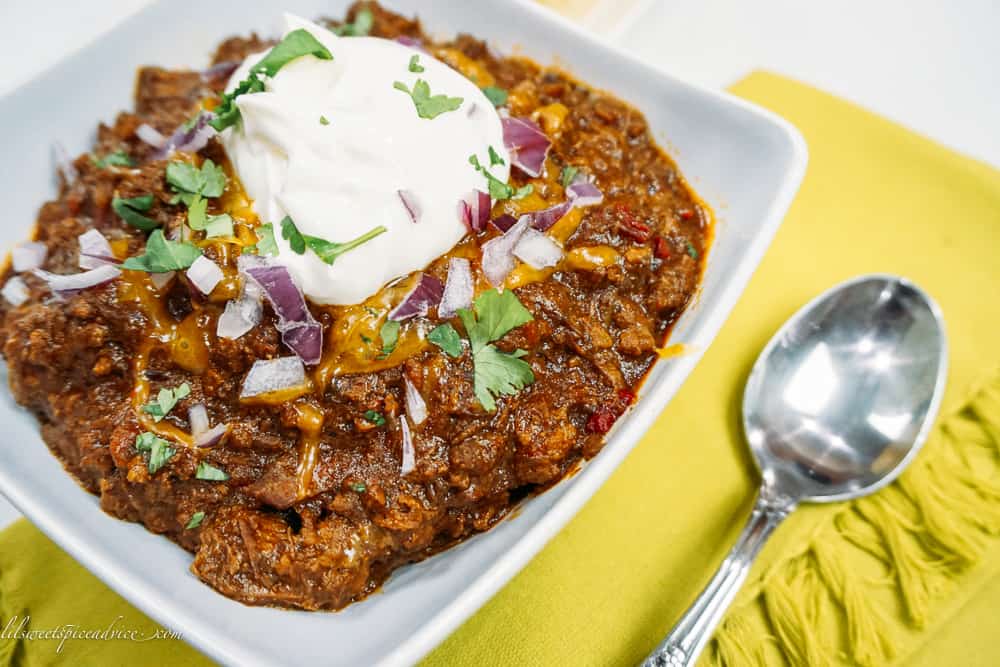 Why use whiskey in this Instant Pot Texas Chili?

I love the spicy flavor that the whiskey lends to the recipe. Houston has a local, small-batch whiskey distillery named Yellow Rose Distilling and I’ve been using their Blended Whiskey in my cooking and baking recipes for about 5 years now. This particular whiskey has a sweet note with very little oak-y flavor to it. It’s very smooth and has notes of cinnamon, allspice, and caramel. These notes pair so well with this chili that I wouldn’t suggest skipping it. The alcohol cooks out so you shouldn’t have any worries about feeding this to kids.

The whiskey also helps to deglaze the pot after the beef has seared so you can scrape up all of that delicious flavor that’s settled at the bottom of the pot. You’ll see a lot of Texas chili recipes use beer in them. The beer or whiskey just adds more depth of flavor to the chili. If I wasn’t eating gluten-free right now to heal up my leaky gut I would’ve used beer. If you’re like me and avoiding gluten then whiskey is a really good substitution! Just use your favorite brand of whiskey if you don’t want to or can’t find Yellow Rose Blended Whiskey. 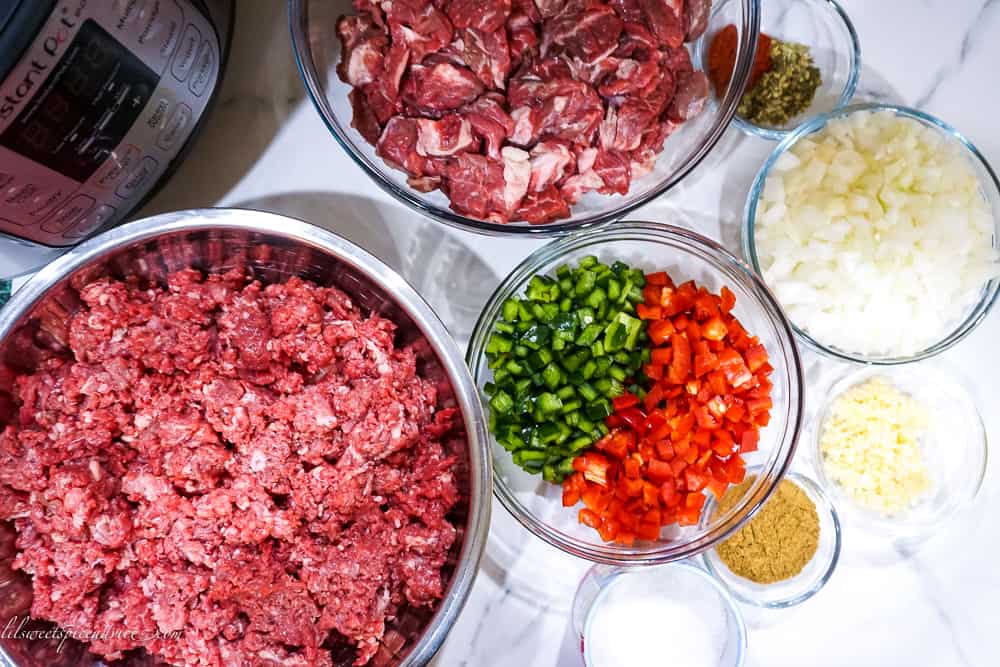 Some people would argue that Texas Chili doesn’t use tomatoes, but I’ve always grown up with Texas chili having tomatoes because that’s how my dad grew up too! Keeping the family tradition alive is the mission! LOL Now, there is ONE thing all Texans can agree about when it comes to Texas chili and that is NO BEANS! Don’t you do it! Don’t you grab a can of beans and throw it into this pot and parade around telling your guests that this is Texas chili. We like our chili to be meaty with not much fiber. 😆 Save the beans for any other region’s chili. 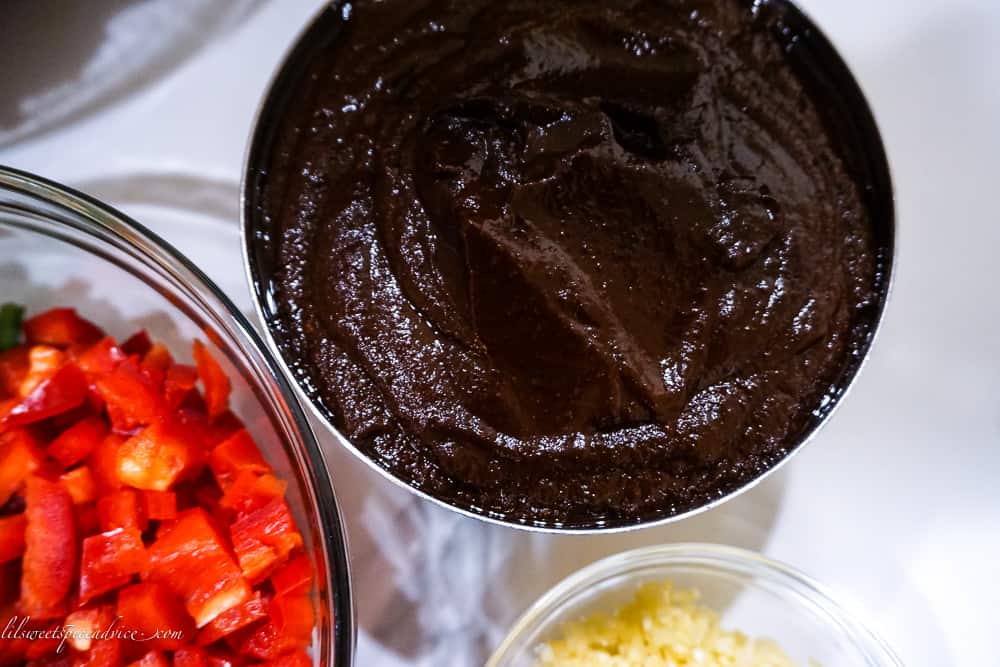 The biggest tip I have to give to make this the most perfect Instant Pot Texas Chili is to make your chili paste ahead of time! I adapted a homemade chili paste recipe from Striped Spatula. Amanda says you can make the recipe and refrigerate it for up to 5 days or you can freeze for up to 6 months. It takes almost an hour to make the chili paste, albeit the time isn’t active cooking time, but when you are in a rush it’s not the fastest process. 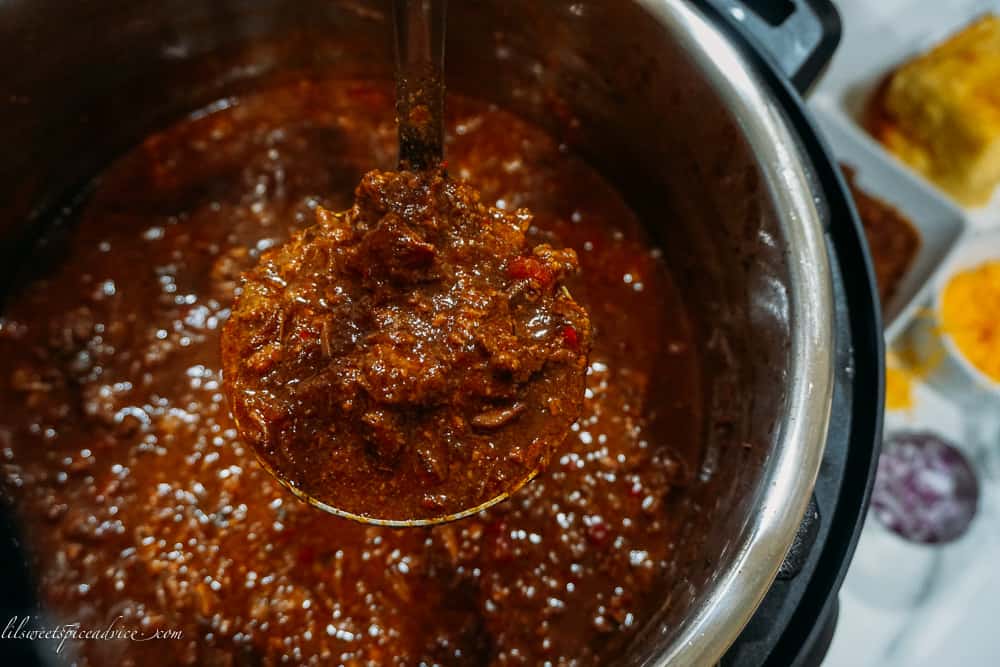 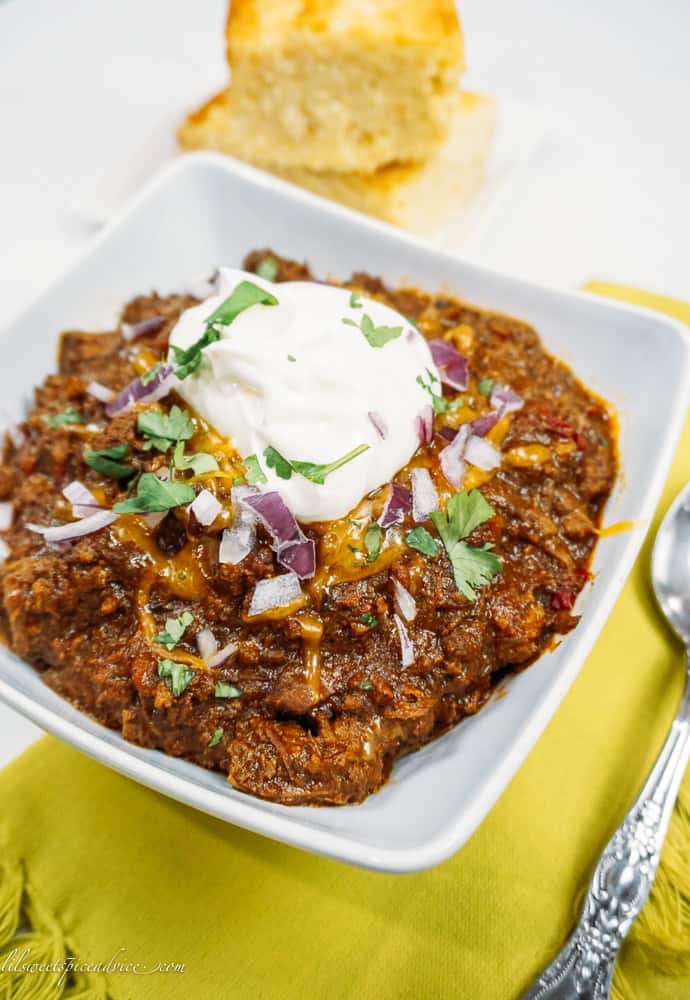 If you didn’t know, chili tastes better the next day so that’s one good reason to make it a day before you are ready to serve it!

Do me a favor and save this recipe by using the share buttons at the top, side, or bottom of this post! Also, be sure to tag me on social media (Twitter and IG: @brittsliladvice) with your pictures. You guys know I LOVE to see your pictures of my dishes! I sure hope the holidays have been good to you. 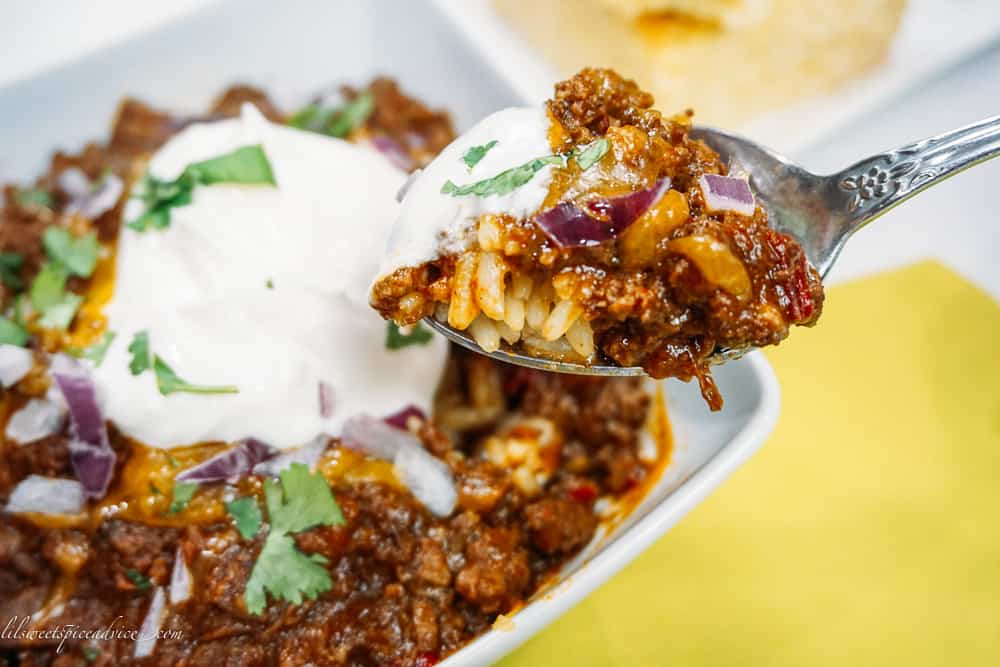 This Instant Pot Texas Chili is BOLD and best of all tastes like it's been simmering for hours but cooked in over half the time.

Notes: This makes a ton of chili, about 5 pounds to be exact so you will want to store the chili in freezer bags and freeze for future meals. It can keep in the freezer for about 4-6 months. Chili paste adapted from Striped Spatula.

What’s Going On and Where Have I Been?

Breakfast for All: Recipe Roundup