A little over a week ago I attended  Karbach Brewing Co . ’s special pint night at The Shack Burger Resort in Cypress, Texas. I have been to The Shack Burger Resort many times and never thought to review them for y’all! The Shack is one of my absolute FAVORITE burger joints in the Houston area! The Shack is basically a hidden gem because if you are driving down Cypress Rosehill you will almost pass it up since the sign for the restaurant isn’t very large, so make sure you drive slowly when your GPS says you’re a few hundred feet away. The Shack looks exactly like its namesake. LOL But that’s what makes it so quaint and charming. The parking lot isn’t paved and all of the seating is outdoors, but there is plenty of shade from the oak trees! It’s actually a great place to bring the family because they have a very large play area for the kids to burn off their pent up energy as they wait for the food to arrive at the tables. There are some covered seating areas in case you would like to sit in a more shaded area. 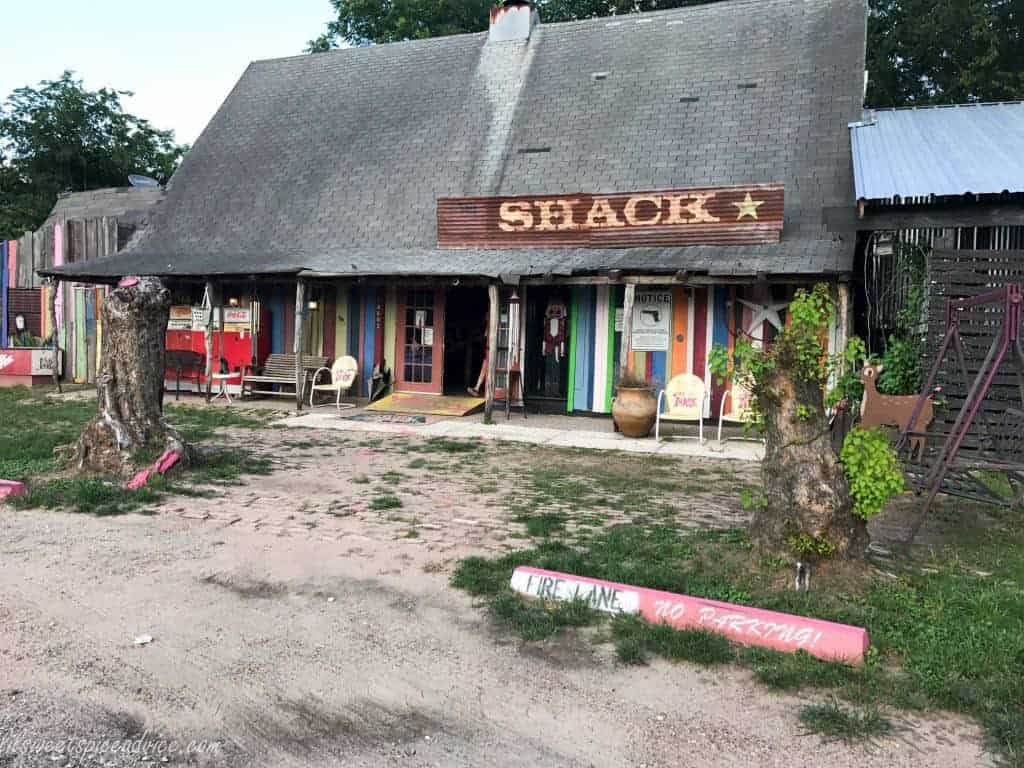 There is a very knowledgeable and friendly wait staff to assist you! If you need advice or recommendations the waiters/waitresses will delightfully give you suggestions. When you walk into the Shack the cashier/hostess will seat you at a table and a waiter/waitress will then come to serve you. The service has always been impeccable each time I’ve visited. Now about Karbach, our waiter told us that all of the Karbach beers on tap were $4 per pint that night and you could also take the glass as a souvenir. My dad and I walked to the bar to check out which beers were on tap and we ended up bumping into the Karbach rep. I believe his name was Matt. We chatted for a bit and he suggested that I try the Love Street , which is a great starter beer for most people and he also suggested trying the Lemon and Ginger Radler  which is brewed from their homemade lemon and ginger soda. The Radler sounded right up my alley so I ordered that one and my dad ordered the Love Street. Matt was nice enough to put our beer on his tab. (No, this post is not sponsored, but I did receive the beer for free.) I am finally starting to come around to drinking beer. Y’all, that Radler is the BOMB!!! It’s so light and crisp, the lemon and ginger shine through beautifully. It’s such a great beer for this summer weather. The Love Street is pretty darn good as well; it’s not hoppy at all, it’s very mild! Matt gave us some tips about visiting and touring the Karbach Brewery. He said to make sure you check out their restaurant’s new menu items and to also visit the brewery during the week on like a Wednesday when there aren’t any crowds; they also have a jazz band perform on that night as well.

It’s safe to say that I will be visiting the brewery very soon and I will also be purchasing the Radler from Spec’s because I couldn’t find it in grocery stores near me. The grocery stores do carry their other beers though! Let’s get into these burgers! They offer nearly 20 burgers with toppings galore! They also offer chicken and turkey burgers. I haven’t tried a chicken or turkey burger from them yet, but I definitely plan to. Burgers I have tried in the past and fell in love with are the Cooter Jack and the Fireman. I HIGHLY recommend trying both of them! The Cooter Jack is topped with jack cheese, BBQ sauce, chipotle mayo, onion strings, lettuce, and tomatoes. The Fireman is topped with pepper jack cheese, bacon, fried pickles, and a spicy honey drizzle. When you are seeking a spicy burger go for the Fireman. And the cool thing about their burgers is you can pick whichever bun you’d like. I always choose the Jalapeno Cheddar bun because it’s such a flavorful bun. This is the M’s Burger.

This visit I decided to order the M’s Burger, which is topped with gruyere cheese, bacon, lettuce, tomato and I asked for chipotle mayo. My dad ordered The Tex which is topped with brisket, grilled onions, onion strings, and cheddar. We were both extremely satisfied. The patties are extremely thick; these aren’t little 4 ounce patties! Even with the burgers being cooked to well done, they are still so juicy! We also ordered Signature O-rings which are 1015 onion strings and the basket is large enough to share with at least 3 people. The batter on the onion strings is seasoned so these onion strings are NOT bland. We also asked for some chipotle ranch to dip the onion strings. The inside of his The Tex burger.

The prices are reasonable at The Shack and they have a very large selection of beers that is ever-changing so you’ll be sure to find new favorites. If you are ever in the Cypress area you should definitely visit and bring a few friends with you! It’s one of my favorite places to take guests.  All in all, I give The Shack a 10/10 for food, service, and prices!

Will you be visiting The Shack Burger Resort anytime soon or have you visited before? Let me know in the comment section. Let’s chat on social media! Follow me by using these links: Bloglovin’,Facebook , Instagram , Twitter  and Snapchat (@merci_britte)  to stay up-to-date. Also please subscribe to my YouTube  channel because I will be adding a margarita recipe video next week!