I’m trying to figure out how to type about my Crown Royal Vanilla Bananas Foster French Toast without drooling on my computer! *sigh* I don’t think it’s possible. LOL Y’all, I have made this recipe 3 times in the last few weeks and I feel like it magically gets better every time I make. Like, it is really that good. I have two witnesses to back up these claims! Haha

Well, one day I woke up pretty late in the afternoon because my Fibromyalgia kept me up super late, as per usual. Anyway, it was lunch time, but I was really craving some breakfast food. You guys should know me by now…I don’t like basic food. I like food with some oomph and pizzazz! LOL I was scrolling on Pinterest as I sat at the dining room table and behold, a French toast recipe appeared on my timeline! So a light bulb went off and my wheels started turning…I knew I HAD to make some French toast for my brunch! I had just recently acquired my bottle of Crown Royal Vanilla Whisky and I have NO SHAME in admitting this, but I wanted some whisky incorporated some kind of way into my brunch! 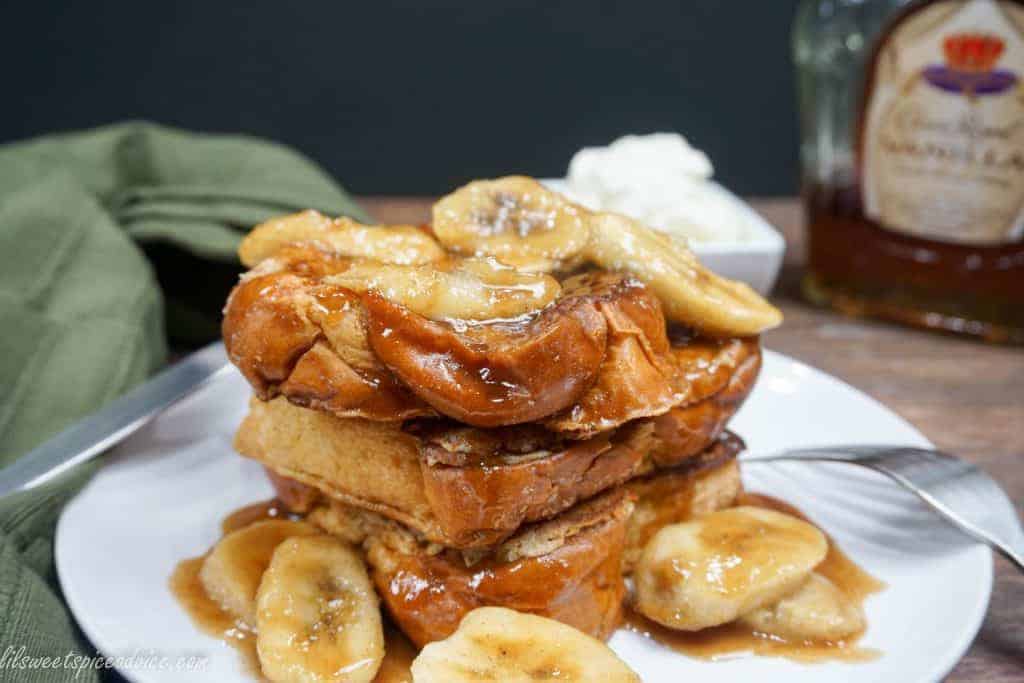 I incorporated whisky into the custard and of course the bananas foster sauce as well as the whipped cream! Now my French toast recipe may seem a little odd to you guys because I used buttermilk and heavy whipping cream instead of the usual suspects of milk and cream. Now there’s no rhyme or reason as to why I decided to use buttermilk over milk, so if you don’t have buttermilk just go ahead and substitute it with milk, almond milk would work too! I love baking with buttermilk because of the tanginess it provides as well as how it makes baked goods tender! I guess I wanted a little tanginess here to cut through some of the sweetness of the bananas foster sauce.

Now, about the bread, I HIGHLY suggest using some sort of thick cut bread! I opted for a brioche loaf (and boy was it buttery and delicious) but you can use whatever bread you like. You could use Challah or French bread too! I had to make sure we are on the same accord about the thick cut bread because I made a huge mistake one of the times I made this recipe. I used potato bread and let’s just say the bread didn’t survive its journey to the pan! *face palm* So don’t be like me! And that actually happened while I was recording the video for this recipe. I haven’t quite decided if I’m going to share that video yet. LOL I will update this post if I decide to share it. 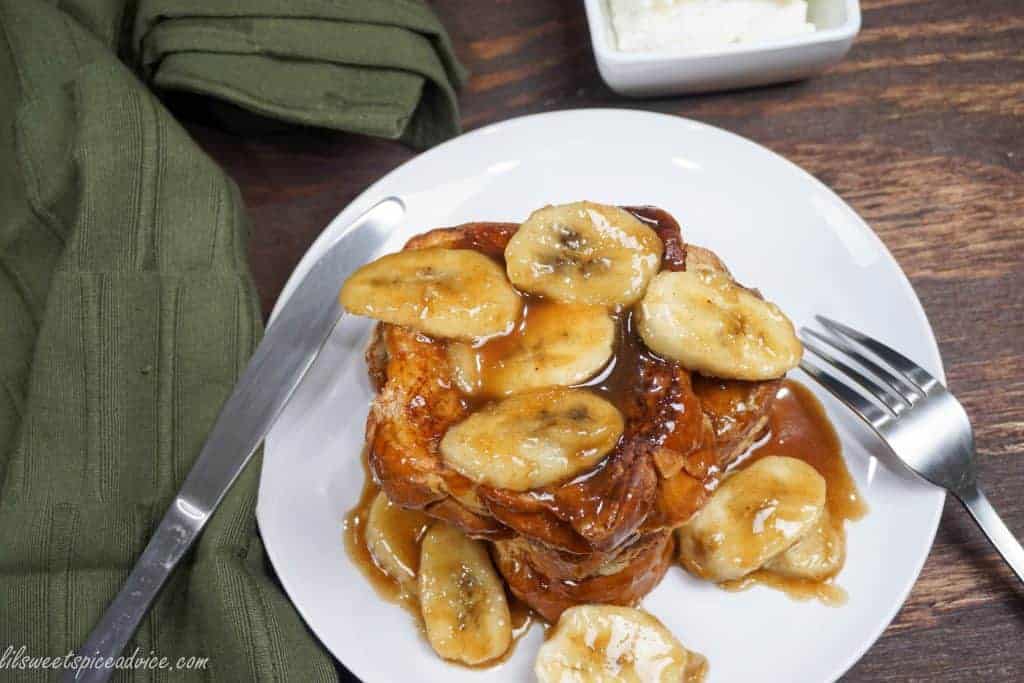 Also, please don’t shy away from this recipe because it’s Bananas Foster! You do not have to do the flambé trick chefs use (tilting the pan into the burner to create the famous flames) if you are not fully comfortable. I want you all to feel as safe as possible in the kitchen, especially since a lot of you don’t really want to be in there more than you have to. LOL Just add the alcohol when I say to add it in the recipe and let it cook. The alcohol will burn off. Oh, also serve this immediately! If you don’t I promise you will have some unpleasant, mushy bananas.

Check out my cooking video demonstration for this recipe below! Also please subscribe to my channel and share the video. 😊

About this whipped cream though! It’s so good that you are going to keep this whipped cream recipe in your arsenal for when you bake pies and need a dollop of whipped cream on top or to top your ice cream floats and sundaes with. What makes this whipped cream so good is the addition of Crown Royal Vanilla! Yep, there’s Crown in every part of this recipe. Don’t judge me! LOL Be sure to pop a stainless steel bowl and hand mixer beaters or whisk into the freezer before you start cooking the French toast. A super cold bowl and beaters/whisk are the keys to perfect whipped cream! 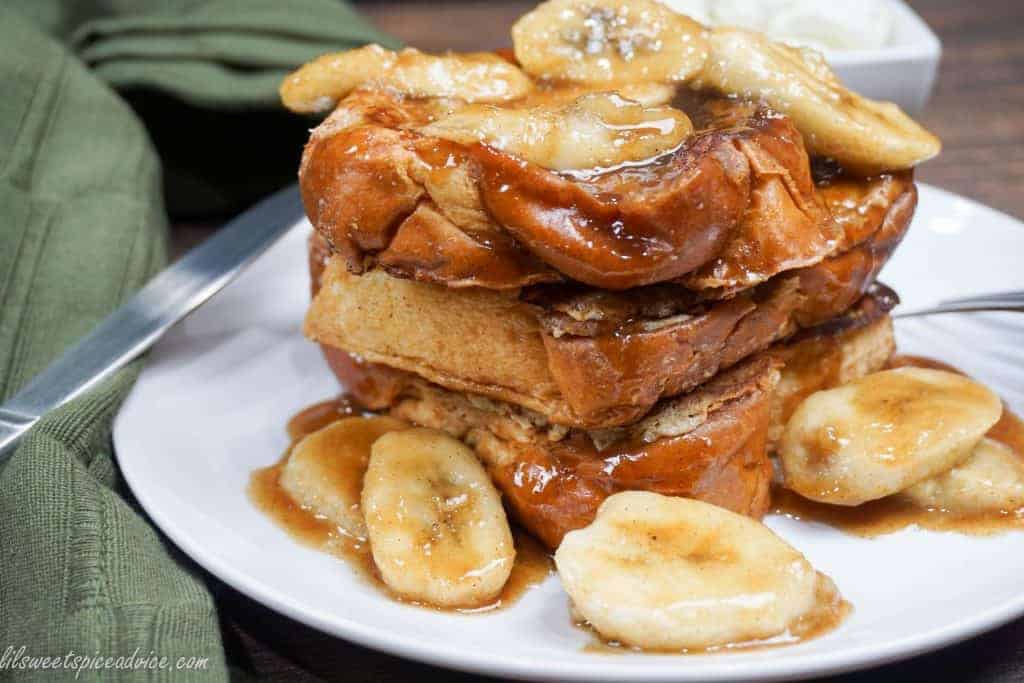 I hope you have found my tips useful. Let me know when you are going to try this recipe! I just know your family is going to thank you for making this Crown Royal Vanilla Bananas Foster French Toast for them. Tag me in your pictures of this on social media. Be sure to share this recipe using one of the share buttons on the side, top, or bottom of the page and pin this recipe to save for later! And be sure to follow me here so we can stay in touch: Bloglovin’,Facebook, Instagram, Twitter and Snapchat (@merci_britte)  to stay up-to-date. Also please subscribe to my YouTube channel because I will be adding more recipe and chat videos soon! 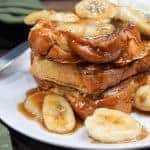 Interesting blog! Is your theme custom made or did you downlload it from
somewhere? A design like yours with a few simple adjustements would
really make my blog stand out. Please llet me know where you ggot your
theme. Bless you

Thank you for checking my blog out! My blog’s theme is through Boldgrid by WordPress, it is not custom.