I know this Baked Spaghetti Squash Spasagna recipe has been long awaited for you guys! I’m most positive it was worth the wait. I wanted to get this right for y’all! Crispy chopped bacon delicately folded into an extra creamy four cheese Béchamel sauce stirred into al dente spaghetti squash, which is baked until a cheesy crust has developed and then topped with a meaty spaghetti sauce! Could you read that without salivating? Me neither! 😉 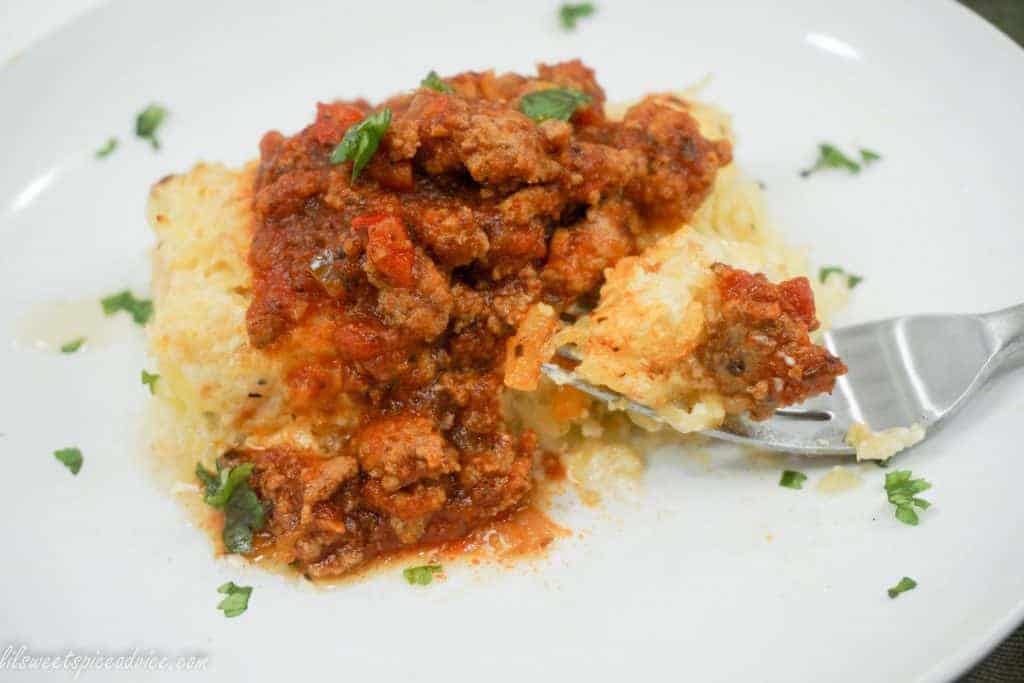 This post contains affiliate links which means if you click a link I will receive a tiny commission to help me run this site.

I cannot take full credit for this divine creation! I drew inspiration from Cheddar’s Scratch Kitchen’s “GiGi’s Baked Spasagna” and Olive Garden’s “Deep Dish Spaghetti Pie.” They are both very delicious and I was craving both of their creations one day, but wanted to try making it at home and putting my own twist on it! Guys, I absolutely LOVE spaghetti squash! I think it is one the most unique vegetables because you can literally sub it in nearly every pasta dish! If you haven’t tried spaghetti squash just what are you doing with your life?! Obviously, spaghetti squash is low-carb, but it’s also rich in B vitamins, folate, potassium, calcium, etc. Consequently, I think it’s safe to say spaghetti squash is definitely more nutritious than pasta! 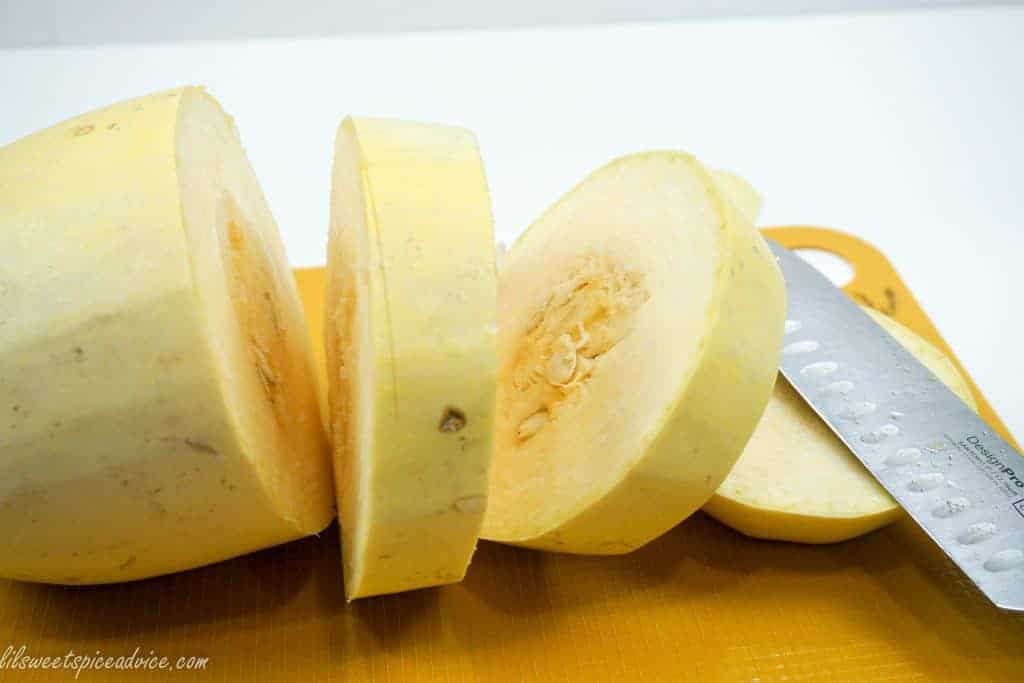 I know y’all are wondering exactly how do you cook spaghetti squash to get perfect strands. All you have to do is lay your spaghetti squash on its side and cut it into rings, I’d say about 5-6 rings, depending on the size of your spaghetti squash. After you have cut your rings, grab a sheet pan and drizzle a little olive oil on the pan so the squash doesn’t stick to it. Evenly space out your squash on the pan, then drizzle the tops with olive oil and sprinkle with salt and pepper. That’s it! Place it in a 400° F oven and bake for 35 minutes. After the squash is finished baking, take a fork and start scraping from the inside of the ring until the strands separate. 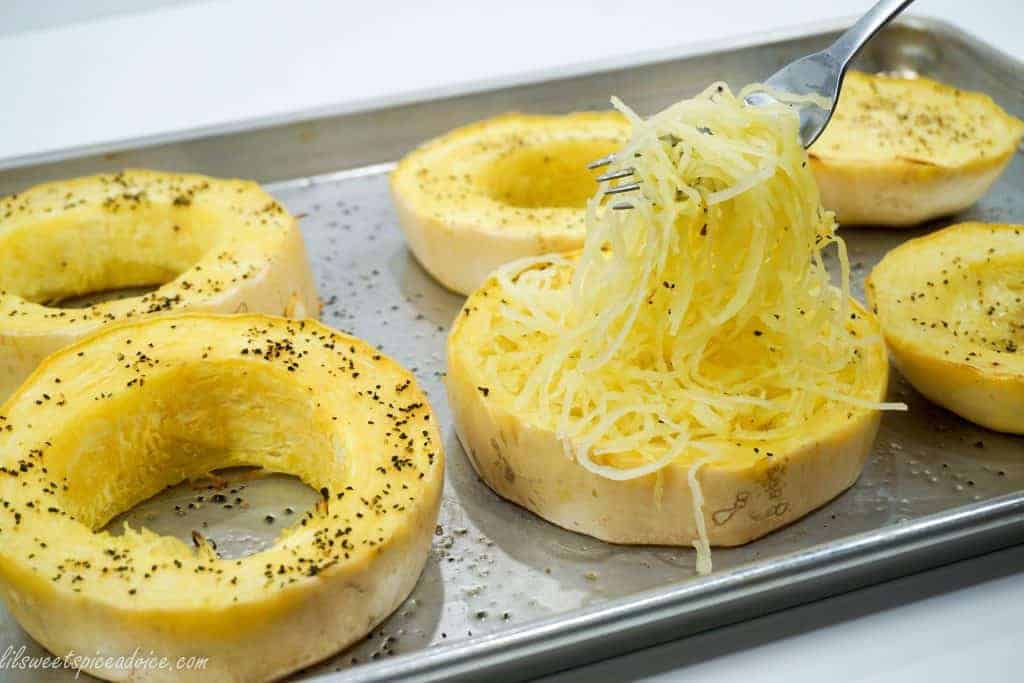 While the squash is baking I made the Béchamel sauce. You’re probably expecting me to say I used low-fat milk or cream here, but I didn’t. I don’t believe in low-fat items at all, because once they remove the fat they usually replace it with some additive to replace the flavor that they have removed. I’ve also learned so much about fats, what’s considered healthy fats and what’s not, so I know definitely to not run away from the healthy fats. Recently in the last few weeks, articles have been popping up about how the industry has lied to us for so many years about butter. It’s not detrimental to us and the replacement that was created in the 60’s for butter (margarine) does way more harm to our bodies than butter! The fat in dairy products is beneficial for the absorption of the vitamins and minerals. I’ll make sure to do a blog post on this subject one day!

The cheeses that I decided to use in the Béchamel sauce are totally optional. I keep tons of cheese in my fridge, but I realize not everyone keeps a supply similar to mine. I might as well be a cheesemonger with the amount of cheese I keep in the fridge. So I have cheese for the low-low if you need anything! *wink* LOL And if you don’t keep a vast variety of cheeses in your fridge it’s okay, we can still be friends, but we can’t eat at your house! LOL 😉  Anyway, you can just use one or two cheeses; I’d suggest sticking to white cheeses though to keep your sauce white.  Here’s a pro tip: turn off the burner when you add the cheese so the sauce won’t break! You’ll have velvety smooth sauce every time. 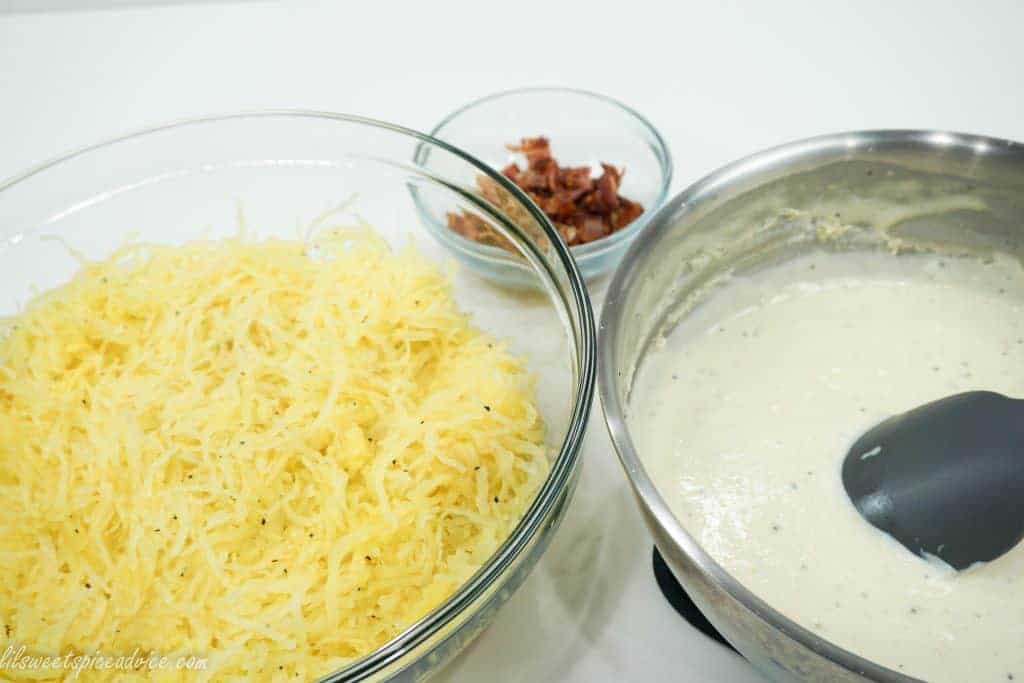 Now, for the fun part, we have to assemble everything! I mix the Béchamel sauce into the bowl of spaghetti squash “noodles” and fold in the chopped bacon. If you don’t like bacon go ahead and leave it out, but I personally can’t get enough of bacon so I added it in. *cheesy grin* LOL You can place the noodles in a greased 9×13 pan or you can do like I did and use a mini loaf baking pan for more uniformed servings. You’ll know the baked spaghetti squash spasagna is ready once you see a bubbly, golden brown crust on top, in about 20 minutes. 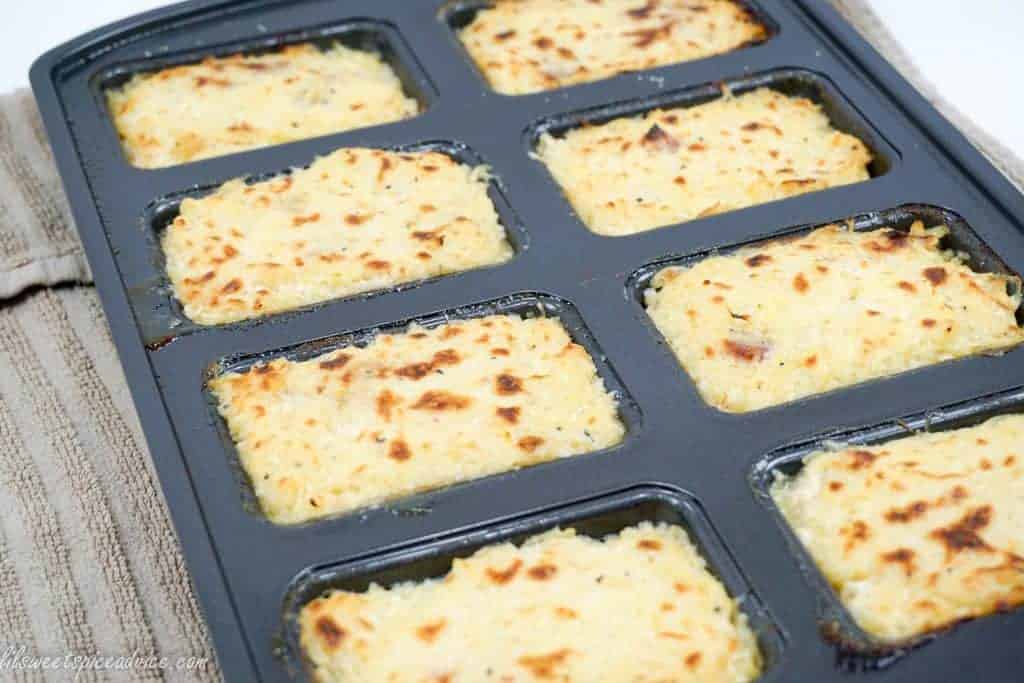 We need to top these bad boys with some garlicky, flavorful spaghetti sauce! I’m not providing a recipe for spaghetti sauce because you can use jarred sauce (like I did) or you can make spaghetti sauce from scratch. Now, if you want to get this meal completed in a timely manner, I’d suggest just browning some Italian sausage and throwing in a jar of spaghetti sauce and calling it a day! The baked spaghetti squash spasagna already requires enough effort so save yourself a little time here. 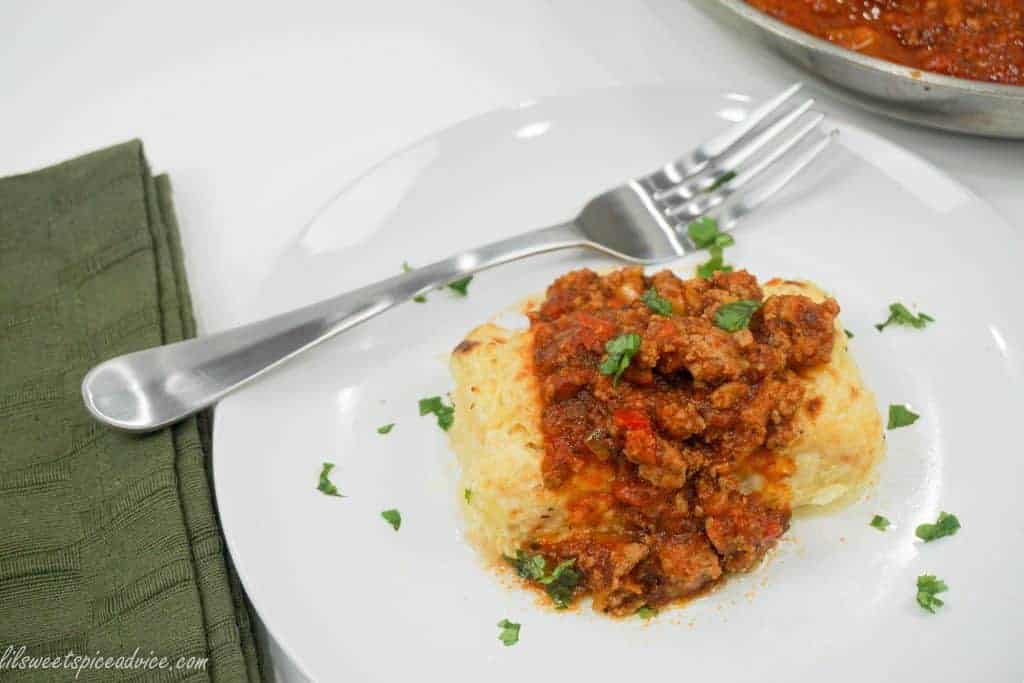 To serve this to your guests, remove the baked spaghetti squash spasagna from the pan and transfer it to a plate and ladle the spaghetti sauce on top. Sprinkle chopped parsley on top and serve! Oh, don’t forget to have some crusty bread or cheese toast on the side. That’s it, y’all.

As always, if you liked this recipe, please be sure to share it with your friends and family by using the share buttons at the top, side, and bottom of this post! When are you going to try this recipe? Please be sure to share the pictures of your meal with me on social media by following me here: Bloglovin’,Facebook , Instagram , Twitter  and Snapchat (@merci_britte)  to stay up-to-date. Also please subscribe to my YouTube  channel because I will be adding more recipe and chat videos soon! 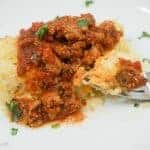 thank you this worked great! can i freeze the left over spaghetti squash or how long does it keep in the fridge?

Thank you so much for trying my recipe, Rose! I wouldn’t leave it in the fridge for more than 3-4 days. It should keep in the freezer for at least 2-3 months.